Speeches in the National Assembly

Statement to the National Assembly on Thursday December 14th, 2017 by the Hon. Vice President and Minister of Foreign Affairs, Mr. Carl B. Greenidge on the Exxon “signing bonus” 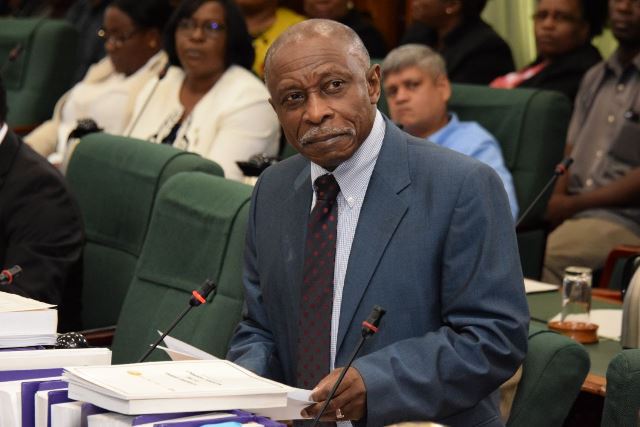 Many Guyanese would have been reading with growing unease the sensational headlines first inspired by Mr. Christopher Ram.

As I read these supposed exposés, I am reminded of the term herd mentality under which each comment is followed by a more outrageous claim as each commentator tries to outdo each other.

The facts are quite straightforward, Guyana negotiated and received US$18mn in connection with the signing of a contract for the renewal of a petroleum license. The sum in question was not US $20m or US $25 m but US$18m.  Whether or not a contract was necessary is a matter of opinion on which I will waste no time. Suffice it to say, whilst such payments are not unusual there is no standard arrangement or formula concerning either the quantum or procedures for ‘signing bonuses’. Governments have pressed or negotiated with petroleum companies to be paid various amounts in the light of the evolving prospects of the sector or industry. I shall return to this.

During the course of 2015 and 2016, after discussions with ExxonMobil, the Minister of Natural Resources proposed to Cabinet that the payment of a bonus on the extension of an agreement by the company be undertaken. Cabinet agreed and in June 2016 the Minister duly reported that the negotiation had been completed. The full Cabinet approved the terms negotiated and the arrangements to receive the funds.

Nothing about the levy was either particularly secret or illegal. Many agreements are approved during the course of any year without being announced.

The intended use of funds received by Government usually determines how they are passed through Government accounts. That aspect does not normally attract the attention of the Cabinet. This was no exception.

The background against which this decision was taken is instructive. As we all know, since we have been in office, the Guyana Government has found itself in a very tight fiscal situation in that its needs for funding far exceeds the total cost of the goods and services for which it has to pay.  At the same time, the MoFA was participating in discussions under the aegis of the UN Secretary-General’s Personal Representative (UNSGPR) in relation to a resolution of the territorial controversy.

There have been times in 2016 and 2017 when we were unable to make timely payments to the legal team advising the Government. This is an undesirable situation. It is the responsibility of the Minister of Foreign Affairs to make sure that payments for services contracted by the MoFA are made according to the terms of the contract. The MoFA had an eye on events due in 2018 and, in particular, the need for funds to pay the enlarged team of lawyers that would be required should the UN SG honour his commitment to refer the Guyana case to the ICJ [International Court of Justice] without further procrastination after December 2017. I understand that the cost of a similar UNCLOS case involving Suriname was over US$10mn.

Faced by the existential importance of the ICJ case, and given that the case had not been yet referred by the Secretary General of the United Nations to the ICJ, the MoFA advised that money be held separately and securely until such time as we were clear as to when it would be needed. Out of concern that adequate funds may not be available from the general budget — i.e. the Consolidated Fund — when it was time to pay for these critical services, the Minister of Foreign Affairs, advised the President that arrangements be made to set aside sufficient funds to make the payment when needed. More specifically he asked that US$15m of the sum received by the Government from the ExxonMobil exercise be earmarked for this purpose.

It was also agreed that US$3mn be set aside for the funding of urgent training of Guyanese in needed skills such as engineering and petroleum geology.

The earmarking of funds is not unusual in Westminster-type systems. The monies collected by GGMC and GFC, for example are earmarked, meaning that they do not go to the Consolidated Fund in the first instance, if at all. This process is also in keeping with that used for other monies received from external sources such as the IDB especially where overseas contractors may have to be reimbursed.

Monies received are sent to the Central Bank, the Central Government’s banker, and located in accounts held there. Those accounts can then be kept separate, separately managed and separately audited in keeping with the rules of those agencies which member states embrace either when we join the agency or when sign the loan agreement.

By contrast the monies so deposited will be converted into Guyana dollars and transferred to the Consolidated Fund.

In pursuit of the decision of Cabinet, the Secretary to the Treasury gave instructions about the placement of the funds. The Central Bank, the Government’s banker, was directed not to utilize the funds to meet any Government expenses without written instructions from a named set of persons, the most senior public financial officers in the country. In this case, members may think of it as the equivalent of a suspense account.  It is therefore inconceivable that in such circumstances, Cabinet Ministers and Ministers Trotman or Jordan, in particular, were supposed to be or were the beneficiaries of the funds and that such an arrangement could be expected to be a secret.

Mr. Christopher Ram, a current affairs commentator, has suggested that paying such funds into the Bank of Guyana (BOG) is a ‘flagrant breach of Art 216 of the Constitution’. That bold statement flies in the face of the practice everywhere.

In any case, the Article in question does not require that the payment be deposited in the Consolidated Fund immediately. Members are free to have a look at the provisions of Sec. 37(2) of the FM&A Act which governs the handling of public funds which is the topic at issue. That article provides for public monies to be held in Extra-Budgetary Funds, Deposit Funds, etc. until they are credited to the Consolidated Fund.

So if the manner of raising of the funds was not illegal and their placement in a Deposit Fund at the BOG was not illegal either, what then is the song and dance about? Perhaps it was based on the erroneous belief peddled by one commentator that this was an agreement negotiated overseas.

That song and dance arise from an assumption, often explicit on the part of the commentators that the intention was to utilize the funds for the benefit of the Ministers directly involved.

Mr. Speaker, just as it is imprudent and nor permissible during the debates in this House to attribute motive, so too in general life. Such behavior may have been the experience of some of these commentators with other Government or in private practice.

If that were the intention in this case however, it would have been quite unwise to invite scrutiny by requiring the authorization by five of the country’s most senior financial officers to permit withdrawal of the funds from the BOG. The very manner of disclosure of the information demonstrates just how porous our system is as regards confidentiality.

Given the purpose for which the funds were to be used, and its implications for national security neither the President nor the Ministry of Foreign Affairs saw any merit in advertising the matter. In fact, so great was the concern that only those who needed to know were informed as to the purpose of the deposit. Consequently, only those Members of the Cabinet directly involved and the relevant technicians were informed.  The fact that those who were investigating this matter could have stumbled on the reason for the holding of the funds and still feel it necessary to make it both public and use it for sensational headlines is testimony to the sense of responsibility in certain sections of our media.

Ghana recently won a case at the ICJ in which they had found it necessary to retain no less than 48 international specialist lawyers. They never broadcast how they were funding those services. Today some in the Ivory Coast rue the fact that they had not realized the scale of the Ghanaian mobilization for the ICJ. Obviously, forewarned they would have taken this into account in their strategy.

Let there be no doubt that those who will challenge us in the Court will be very pleased at the airing of this controversy in Guyana by Guyanese themselves.

More disturbingly, the sensational often misleading disclosures being passed off as exposés in the public interest follow closely on attacks on international companies operating here. Some of these companies have broken no laws here; they owe us no taxes or imposts. They are operating in neighbouring States where they are welcome, but in Guyana some sections of the media demonise them.

Given the potential importance of petroleum production to the wellbeing of all Guyanese, it can only be assumed that these commentators believe that it is harmless fun and that Exxon, for example, if seriously damaged, would leave to be replaced by one in the long line of (six at most) companies hammering on our doors to undertake or replace the US$4bn in investment required to bring the discovery to the production stage. On the other hand we see neither the Suriname nor Brazil media carrying such demonization of the very company from which Sunday’s newspapers suggest we should have extracted a US$700m signing bonus. Only in our neighbour to the west are such attacks to be seen.

Whilst I am on the signing bonus of US$700 M, Mr. Speaker, please permit me to say that unlike Guyana ExxonMobil’s submission of such, a large signing bonus took place after the 14th round of auctions in a country [Brazil], which discovered oil and began production some seven years ago after the discovery of what has been described as a monstrous find of light petroleum. Although Brazil is not yet the world’s largest source of proven petroleum reserves, it is already the 15th in world rankings and was consequently able to attract over 130 firms in this round of bids. Most significantly however, the obvious difference between that neighbor and Guyana is the absence of the shadow of a neighbour claiming practically all their waters offshore in which their enormous reserves have been located.

Finally, Mr Speaker please permit me to say a word on commentators’ asymmetrical treatment of the law and constitution. We have noted the strictures of Mr. Ram, the media and what one paper called the transparency agency regarding the funding of State activities without reference to the Constitution or the FM &A Act of 2003.

So shallow has been their analysis that the Leader of the Opposition can have the gall to announce that in the period June 2000 to the decision on 17 Sept 2007 when the maritime case against Suriname was referred to the UNCLOS Tribunal and decided, the Government of Guyana contracted service without either paying for them or without passing the matter through the Consolidated Fund. That story of the State contracting services and being proud to say that it was in the interest of a private company was related without comment from the Auditor General, Mr. Ram or without any threat of legal action or opprobrium.